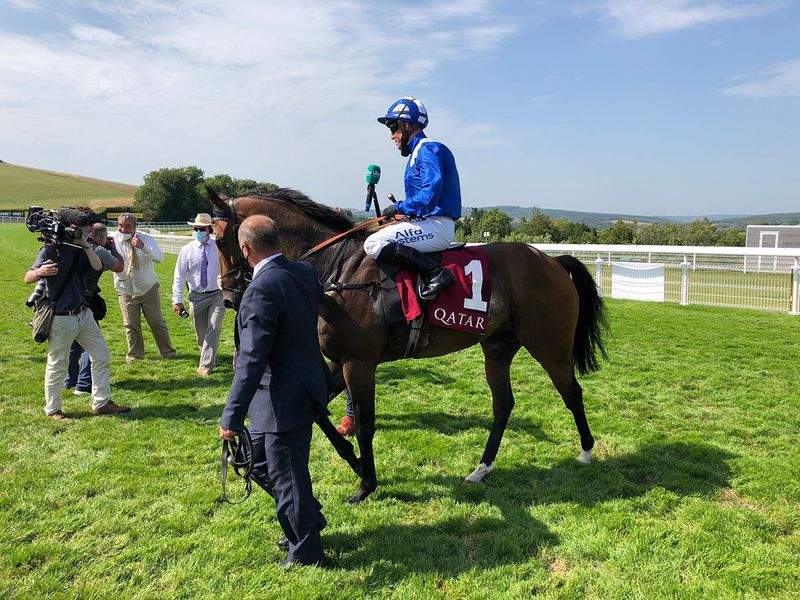 Dubai: In the rich history of flat racing, there have been many great champions — but Battaash showed just why he deserves to reside at the very summit in the sprinter’s category after flying home as winner of the King George Stakes at Goodwood, England, for an unprecedented fourth time on Friday.

On a day when the sport received a big setback as the British government withdrew permission for spectators to attend the final day of this year’s Glorious Goodwood meeting as a trial, Battaash shattered the track record time to lift the gloom.

Charlie Hills’ stable star, who had won the five furlong contest by three-quarters of a length last year, four lengths in 2018 and two-and-a-half in 2017, bolted home a stylish two-and-a-quarter lengths winner over Golden Slippers and 100-1 long-shot Ornate.

The winning time was 55.62 seconds, which eclipsed the six-year-old’s own mark of 56.02s set in the race last year.

Battaash is owned by Sheikh Hamdan Bin Rashid Al Maktoum, Deputy Ruler of Dubai and Minister of Finance, who watched the race from his Zabeel Palace in Dubai.

Sheikh Hamdan, one of the most prolific owners and breeders of top race horses in the world, acquired the son of Dark Angel through his breeding arm, Shadwell Estate Company, for a sum of 200,000 Guineas at the Tattersalls October Yearling Sale in 2015.

He was immediately sent into training at Hills’ stables at Lambourn in Berkshire.

Hills was full of praise for his galloper and told Racing TV: “He’s so talented and I’m proud to have a horse like him in the yard. It means everything.

Crowley, who is based close to Goodwood in nearby Pulborough, has a total of 73 career wins to his name at Goodwood Racecourse.

“He was good, he was getting a bit lonely out in front and it’s very hard to find horses quick enough to lead him,” Crowley, 42, said.

“He was in front a long way and was just idling so I had to give him a couple of taps just to keep his mind on the job.

“He’s so fast and very consistent now. If a horse wants to take him on in a race then good luck to them. He’s so quick he burns them off from halfway.”

Saturday is the final day of this year’s Glorious Goodwood meeting with the feature race being the Group 2 Langtry Stakes.